TL notes later since I have to dash.

First, “savourodeur” has been changed to “délicieuxmiel” after some thought. This is a combination of words meaning “delicious” and “honey” in French, and is pronounced (I think) similarly to デリシャスメル. It’s still terrible grammar, though.

I didn’t notice this last week, but “katyusha” in Japanese is a type of hair band. Her last name also has the character for red, so she’s “Red Hairband”.

The studio translates the episode titles, but this week they left something out. Whether on purpose or not, I don’t know.  All together it’s something like, “Even in death, I will not forgive you.” Normally the first part is この身, which is pronounced このみ or “konomi”. このみ also happens to be how you spell the name of the girl-turned-kuma this episode. With that in mind, it becomes something like, “Even with Konomi’s death, you are not forgiven.”

Not really a translation thing, but I thought it was interesting that on one side of Kureha’s house is a road to the kuma and a sign with one on it, and the other has a sign for humans. Kind of like she’s between both worlds.

Lastly, around 15:26 Sumika goes on about chawanmushi originally.

And if you’re wondering what a lily bulb looks like: 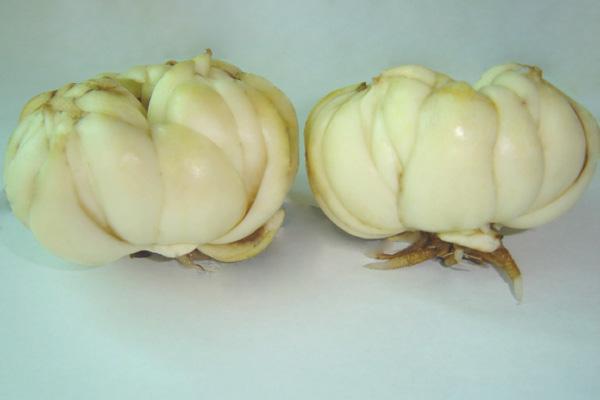 Again, if I forgot something let me know.

This entry was posted in TV Release, Yurikuma Arashi. Bookmark the permalink.